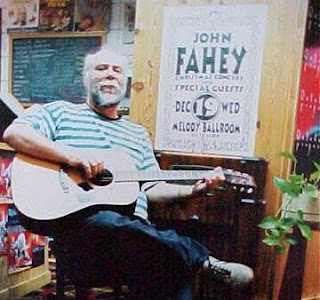 by Tyler Wilcox
Dig into an hour's worth of music and chat with John Fahey, broadcast in the early 1990s on John Schaefer's New Sounds program on WNYC. This period is a bit of a "lost" era for Fahey, as he battled Epstein-Barr virus and various psychological traumas. Typically, John is very candid in recounting these troubles during the interview segments -- Schaefer seems a bit taken aback by some of the guitarist's casual revelations. But Fahey sounds in good spirits, despite some dark turns, discussing the early Takoma Records days and fellow players like Leo Kottke and Robbie Basho ("I never liked him," Fahey says of the latter), and even apologizing profusely for coming up with the term "American Primitive." And the playing is sharp and enjoyable, including some choice selections from the then-new Old Girlfriends & Other Horrible Memories, as well as a nice rendition of Robert Johnson's "Come On In My Kitchen" (which Fahey would record with Cul de Sac a few years later).