The Interpretation of Blind Joe Death 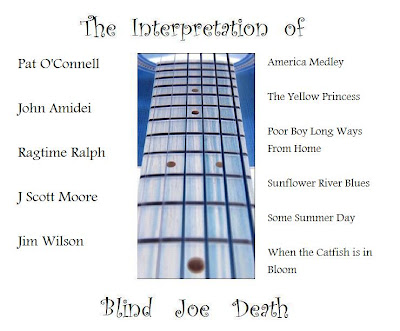 Well here we are at the end of the week and it's Fahey's b-day and you get the gifts.  Hope you all liked the TAB book, quite hard to come by I believe.
And today I'm very fortunate to be able to make a few songs available for download.  Fahey songs by the faithful followers of the Takoma school of pickin' and grinin'.
I call it The Interpretation of BJD.  The following people contributed to this effort, please visit their sites and give them a listen.  The d/l link for this is at the bottom.

Jim Wilson plays fiddle and banjo with a southend-on-sea based band called The Lucky Strikes. Jim was more than happy to contribute an effort to the tribute, he lays down multiple instruments here on When the Catfish is in Bloom.


Pat O’Connell’s contribution is called America Medley.
Pat says: I decided to record a medley of tunes from my favorite Fahey album, America. One of the things I love about America is the consistent tone and mood throughout the entire work. It's almost as if it was all recorded in one sitting (maybe it was?) Like America the country, this album is a melting pot of influences from Country Blues to Classical to Appalachian Folk all tied together with one unified voice. The notes ring out with expansiveness reminiscent of the American landscape.
Fahey explores the classic open G tuning (DGDGBD) to the max on this album. I strung together all the pieces in this tuning and was surprised at how well they all seemed to complement one another, despite their different origins and time signatures.
Starting with the Classical-influenced "Dvorak".
Then into the spiritual blues "Jesus is a Dying Bedmaker" (yes that's spelled Bedmaker. Who better to make a pallet than Christ himself?)
Then into "Special Rider Blues".
Then into "Finale".
Then "Amazing Grace".
And finally, the upbeat "Song #3", which ends with the final chord from "Special Rider" (had to sneak that in!)
I've never played these tunes as a medley before. This was something I came up with just for Fahey Week.

Ragtime Ralph did a great version of Poor Boy Long Ways From Home that I just had to put on here.  This is from The Backporch Drifters release.

John Amidei’s myspace page is full of Fahey tunes that he very graciously sent to me for this tribute.
About John- I grew up in the mountains around Durango and Silverton, here in Colorado. In my early years I attended many Ute and Navajo Pow-Wows and dance events and love the music of the deserts- the music of winds and strings make me feel at home. I studied Music Composition and conducting in Denver at Metro State College but I settled on Bluegrass Music for my social music, African, Indian, and Indonesian music for inspiration, the intricate Fingerstylings of the Blues- (John Fahey and others) for my personal meditations and health.
I have been a professional Interior Space Designer for many years but recently threw my past away to experience my life in a completely new profession as an entrepreneur. I guess, after all, I work for the same reason that I play--To communicate, to learn more about myself and others, and to grow more involved with people and more in love with life every day.


Thanks to ALL who helped out this week! Hope you all enjoyed it.

So d/l this thing and give it a listen!