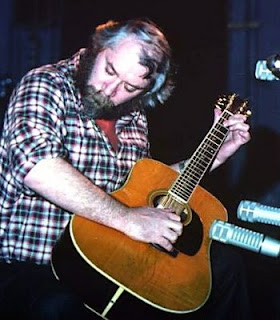 Back with some more guitar TAB!  Too bad it takes me 300 years to learn one song!  How about you?  I know some people learn this stuff quickly so here's a couple more from MTW !!

Today it's a duo of open D tuning!

Steve Talbot on the Keddie Wye
From the liner notes: First he worked on the Espee, later the Western Pacific. He used to tell me hair-raising stories about running down out of the mountains and hitting the Wye and the tunnel at Keddie, California going west. Feather River Route. Now, I hear the whole town's for sale. Nevertheless, the Union Pacific bought the W.P. Something's up.

Really nice to get some Fahey TABs that you just don't see out there on the internet.

Dianne Kelly  is from one of my favorite titles in the long and impressive list of Fahey titles.  Old Girlfriends and Other Horrible Memories.

I was just reading where Woody Guthrie said to collect titles, good titles and save them up.  Funny, cause I think I've come up with some good ones in the past, and they are around here some where.  But there's so few of my own songs that I've composed that each one has about three titles!