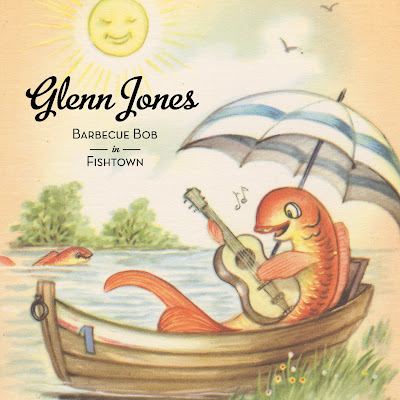 From the Strange Attractors site:

Returning to Martha's Vineyard where Jones recorded his previous masterwork (Against Which the Sea Continually Beats, Strange Attractors, 2007), Barbecue Bob in Fishtown explores the possibilities of classical composition within American folk forms and solo instrumentation. Its precisely this stylistic melding which sets Jones apart from his modern-day acoustic underground brethren. Jones is able to discover and project wide-screened cinema from just 6 & 12 strings, coaxing vivid panoramic images from his sparkling fingerstyle playing. Experimentations with tuning and various capos of his own invention are wed with delicately expressive playing and a remarkable compositional prowess. Barbecue Bob in Fishtown also finds Jones' performing solo on 5-string banjo for the first time on record, exhuming the spirit of Clive's Original Band as seen through a Dock Boggs-esque prism.
Free MP3 of A Geranium for Mano-a-Mano

Buy at Strange Attractors
Glenn was kind enough to let me post another song from the CD as well. I chose track #4, Redwood Ramble Misremembered. Per the liner notes, it's a Robbie Basho song, or at least a Basho phrase that Jones built around. I had to hunt around to find the Basho version, I found it here. Glenn's effort results in a beautiful song, perhaps he should misremember a few more of his influences! The other really strong songs on this CD are the opening tune, Barbecue Bob in Fishtown and track 6, Dead Reckoning. The later being composed in the studio and cut in three takes.
Not that this has much to do with the music that an artist produces, but I find that a nice fat insert is always a welcome addition to a CD of great music! Glenn comes through with a lot of info that I always find very interesting, what inspired the song, what instrument it was played on, the tuning and even the capo position! Or what's left of the capo after he saws it in half. Extra bonus in this CD is a B&W montage of Glenn getting his nails done, presumably before going into the studio? I dunno, but all I can say is, thanks for the kinda creepy photo shoot! And what's up with the Electric Mud album?
Ok, back to the music. I mention my favorite tracks above, now let us be clear - the other songs are good too, those are just my favs. Glenn does a little something new on this CD, as all artists should, he put a couple of solo banjo pieces on here. Now, I'm not much of a banjo guy so you will have to judge for yourself, or try to decipher "...exhuming the spirit of Clive's Original Band as seen through a Dock Boggs-esque prism." Man, why don't I write cool stuff like that? Ah, anyway, I think I like Jones' efforts on the banjo because he is a guitar player playing banjo, like a guitar, instead of a banjo.
Anyway, here is track #4 as promised.

Buy at Strange Attractors
No comments: 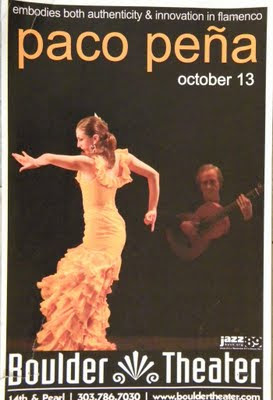 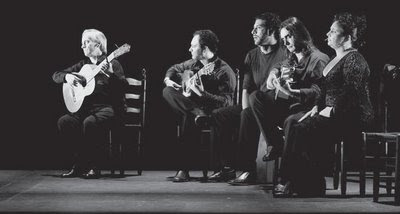 Paco Pena puts on a heck of a show. Though I knew that this show was not guitar-centric, I wasn't going to miss a chance at seeing flamenco of such a magnitude. So now I've seen Paco Pena and Paco de Lucia. I would just like to see de Lucia again because when I saw him it was with John McLaughlin and Al Di Meola. Not that that was chopper liver, it just wasn't flamenco!
Anyway, the show featured dancing very prominently. It was great to get to see Ángel Muñoz, an excellent performer! My favorite parts of the show were Paco solo (one tune) and the two pieces he did with just him and one dancer.
Paco is off to Canada for the rest of the North American tour so you better check the schedule and get your tickets.
I did record the show and a few of the pieces came out pretty well, just a little shuffling here and there.
Download them here and please let me know what you think.
¡Olé!
1 comment: