I've been aware of Charlie Schmidt for some time now, but you may not be.  I suggest, no, I strongly advise you to listen to Schmidt's guitar playing.  Charlie has been haunted by his fascinating personal association with John Fahey for decades.  But it isn't just the bizarre relationship that all report when spending any time with the great prankster Fahey.  No doubt Schmidt probably wasn't the only one of the two that was never really sure when the joke was on and when it wasn't.

If I must cajole you into visiting Schmidt's web site...I will.  Do not tempt me into such shocking and rude behavior.  For there is music issuing from his guitar that haunts me just as Schmidt is haunted by Fahey's music.

From the new web site:


"A shadowy figure still haunts Mr. Schmidt. The timbre of his dissonant guitar rings out into the night when all he craves is the sweet embrace of sleep. John Fahey, for it is he who still haunts, has been dead these past ten years but somehow, his restless mischievous spirit lingers in the haunted guitar of Charlie Schmidt." 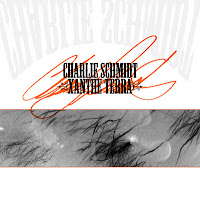 And while Schmidt will tell you it's time to move on, the influence is and no doubt always will be undeniable.  One listen to Schmidt's 2005 release Xanthe Terra will convince you that he is his own man.

Now, years later Schmidt is ready to strike out into the world again.  With six strings ringing like a symphony Schmidt presents his three part guitar suite, "Evening Suite."  His first work made available in years.

Visit the new site, Schmidt Guitar, to hear the new tracks and buy MP3's of the tracks.