Christoph Bruhn - Weekends on the Frontier

Matt Sowell starts The Deadman's Rag with patience and space.  The sparse and wide open piece, "Dusty Road" puts this listener out in the middle of nowhere, the sky dominating the landscape.  Eventually the agoraphobia fades, the road feels right and the traveler gets on down that Dusty Road.

Sowell's effort features 13 solo pieces, all penned by Sowell himself.  Dusty Road is performed on a Weissenborn in open G tuning.  The album is also peppered with 6 string and 12 string pieces.

As you would expect, there's lots of open tunings to be found, what you might not expect is Sowell plays a lot of them on Gibson guitars.  "Walking the Tracks" is a contemplative and yet somehow playful piece in open D, played on a Gibson J-180.

Recorded with a variety of mikes, these tracks are nonetheless cut as a single track, no overdubs.    "Wild horses on the Hills of the dead" is played in EAC#EAC# and it isn't as dark and ominous as the title might imply.  For me, just the right amount of dissonance.

The 2nd half of the album is full of songs titled as rags, the kind you might expect, short and crisp and some you might not.  "Dead Man's Rag" clocks in at 8:35 minutes and is full of variation as Sowell works his way through the iterations (nicely separated by space) of his work.  It's played on a Takamine 12 string with just the right amount of slide work.

Click HERE to get on over to Sowell's Bandcamp

Trace Bundy is one of our own here in Colorado.  If you get a chance to see him, go.  He's a great live show and tours all the time!!  Bundy plays the slapping and tapping style of solo guitar.  He plays some of his own stuff and covers from all over the musical spectrum from Guns N' Roses to a disco medley.


ESPN had a contest where musicians play the show's theme and fans voted for their favorite.  The fact that a solo guitarist won is great!
No comments: 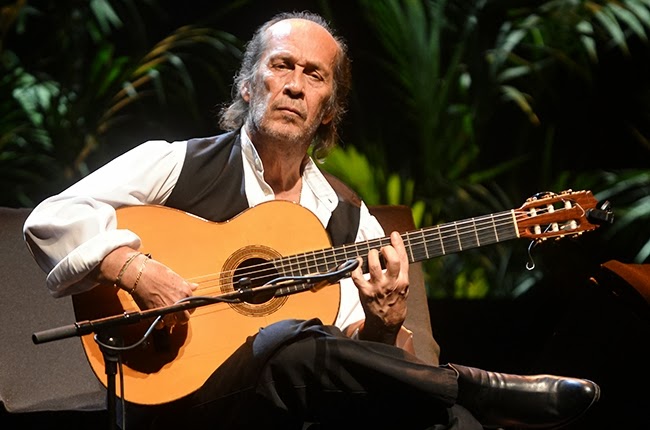 At the risk of sounding like ‘one of those people,’ flamenco music is the purest most authentic music for the guitar.  I usually chuckle when it comes to discussions, debates and assertions about authenticity.  It’s such an academic exercise with so much subjective bias that I’m quickly bored with it.

There are arguments made all the time about the purity and authenticity of flamenco.  The irony is that you will find arguments in the community that it has morphed and changed and is no longer pure and just as many saying change is inevitable, without it flamenco dies, therefore the new stuff is still pure and authentic because it’s simply evolution.  But that isn’t really what I’m talking about.

I’m talking about the perfect genre for the guitar.


String buzz is used purposefully by flamenco guitarists.  I don’t hear it as a detriment to the music as so many do, it’s a part of it, it’s a sound that the guitar is capable of making, so don’t shun it, don’t over-do it, embrace it.  Other techniques the flamencos use: sliding, hammer-ons, pull-offs.  And then there is the rasgueado, a technique still confined primarily to flamenco and yet seemingly so right for the guitar.  And dissonance, for those of you that like that in your American Primitive playing, try listening to Callejón De Las Canteras by Tomatito.  The Taranta form of flamenco is amazing and beautiful.

Flamenco not prissy, board-up-the-ass classical, though it can display all the touch and tone of classical if it wants too.  Andrés Segovia tried to remove the use of rasgueado from the classical school, considering it to have been developed "in the noisy hands of the gypsies."  Flamenco may be the most challenging style of guitar music to learn.

Flamenco uses the guitar’s natural percussive qualities with some tapping, thumping and string buzz.  But at the same time it isn’t centered on that style.  Michael Hedges and Don Ross, sure that’s great stuff.

The flamencos knew the value of percussion 100 years ago.


And, it’s natural, no thumbpick, no flatpick.  Fingers and nails.  Strings and wood and glue.  And soul.

All of this of course has its roots in necessity.  The gypsies were resourceful if not resource laden.  That shaped the way the guitar was played and it’s still there today.  Ah! So the purity is retained!?

And as South American and Cuban influences crept into the music they were again resourceful in saving what might have been a fading folk music by injecting subtle influences.  Paco de Lucia turned it upside down, adding new harmonies and even new instruments.  The cajon was adopted by Paco and is now considered very flamenco and nearly every flamenco performance will have one. Pure  and authentic, or not?


For me that is not the question, because it is still about how the guitar is played.  That hasn’t changed.


Ever since I discovered flamenco music I've been drawn to it.  Primarily the solo stuff, but with a band as well.  It seems to be the music that was meant for the guitar.  It has the power of rock and roll, the pain and sadness of the blues, it has it all.  The guitar in its natural state.  The guitar is incredibly adaptable but for me, flamenco is where all of its natural and best qualities are in perfect balance.

Paco de Lucia has passed out of this world.  If you've never listened to flamenco, give it a try.  Download a Paco concert HERE.