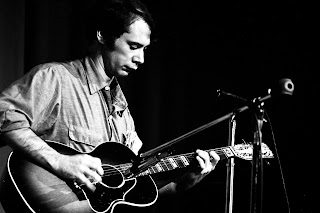 On Doing an Evil Deed Blues
In Christ There Is No East or West
The Transcendental Waterfall
Desperate Man Blues
West Coast Blues.

Here are some notes on these titles from JohnFahey.com
Rather than simply repressing the original "gas station" edition of the album, Fahey felt his playing had improved enough to warrant recording anew several tracks he was no longer satisfied with, which he did in April of 1964. Though the cover of the reissue would declare that Fahey had newly recorded five songs for the second edition ("On Doing an Evil Deed Blues," "In Christ There Is No East or West," "The Transcendental Waterfall," "Desperate Man Blues," and "Uncloudy Day"), a comparison of the tracks made in '59 and '64 reveals that "Uncloudy Day" is the same recording. "St. Louis Blues" was slightly edited from the 1959 original, eliminating the song's opening verse. Dropped altogether was Fahey's version of Blind Blake's "West Coast Blues." (John was never pleased with his recordings of the song. He later claimed he couldn't use the original version because the only surviving copy of the album had a bullet hole through the track!) To compensate for the missing song Fahey recorded a nearly 11-minute take of "The Transcendental Waterfall," expanding the length of the original version by some four minutes. This song is important as an early example of Fahey's stretching of musical form and harmony. His experimentation with noise and meaningful dissonance was still coming into focus. "'...Waterfall' was premature," notes John; "only now can I play that kind of stuff."

Once again Damian has sent these files my way, thanks!!!