Chuck Morrison started building guitars in 1974. In Boulder Colorado. Two years later he added mandolins to his production and named them after the flatirons which overlook the city. In 1979 he moved to Bozeman, Montana where he partnered with Steve and Maxine Carlson to build and market the mandolins. While Chuck sold his share of the business the following year and moved to Vermont, Flatiron continued on, spawning a strong musical instrument building tradition in Montana.

In Vermont, Chuck spent 12 more years building guitars of all types, a few other instruments and performing many different styles of music. He earned a B.S. in Environmental Science and returned to Colorado in 1992 to begin a new career in computing. 25 years later, having designed and built his own solar powered workshop and home, he turned is attention back to designing and building guitars.

I didn't know any of this a few months back when I started going to a new guitar society meeting in the area.  I think it was my first meeting that I saw a very unique guitar.  Chuck Morrison is the president of the Guitar Society of Northern Colorado and he was toting around this guitar and letting everyone try it out.  What I didn't realize was that he also designed and built the guitar.

As you can see below it's not a typical guitar.  Notice the sound hole, the cut-away and there's more that isn't readily apparent; a sound port in the lower bout that can be opened and closed, an adjustable neck and Morrison's Offset Keel neck design that allows great access to the upper frets.

Chuck is gearing up to market a line of his acoustic guitars based on features used in the guitar you see above.  It's such a unique guitar I had to ask him if he would be kind enough to talk about his work for the blog.  Not only was he gracious enough to do so but he even accepted my self-invitation to tour the shop and hang out for a bit to learn more about how he builds his instruments.  It was a great visit.  Check out the interview below to learn more about Chuck and the instruments he builds.


You were a student at CU when you left to start building instruments.  What was so compelling for you at that time?


In retrospect, I have no idea. We all feel things strongly when we're young and later on we ask "what was I thinking ?"  It was an exciting prospect and I made the leap.


One of your bridge configurations is a nod to NBN guitars, a Colorado company.  How has NBN and other Colorado influences affected your instruments over the years?

I credit Reb, Andy and Monte for motivating me to start building guitars. Aside from building great playing and beautiful instruments, they turned out to be great people. How could I not try to emulate them ? They did some different things on their guitars, so it never felt wrong to change things up on an instrument in pursuit of a better result. Other influences from that time were Max Krimmel and Pete Nightingale. I'll always credit Dave Goodrich for driving me to understand what quality means.
The obvious NBN influence on my steel string guitars is the staggered bridge pin configuration. The rationale is to reduce the chance of the bridge wood splitting between the pins. It has an interesting visual quality as well, but it's primarily functional. I redesigned the bridge shape long ago and it fit the pin configuration nicely, so I kept it. The other thing I do is carve the neck heel and peghead on the classier guitars. This came directly from the NBN Limited Edition series, which in turn came from high end banjos. Reb and Monte built banjos at ODE before becoming NBN and you can see some of that influence in those guitars.
I should mention that I am proud to be a part of Colorado's lineage of instrument building, which I've traced back to 1959. There have been some outstanding builders in this area and that continues to this day. The rosette I designed and use for my Classical and Flamenco guitars honors the Colorado connection. 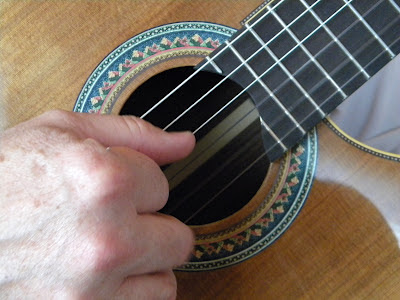 Your Keel neck design is your own invention.  It has its obvious purpose, but what do you hope is the result of players having improved access up the neck of an acoustic guitar?


Ultimately the hope would be that the repertoire of the acoustic and classical guitar would expand to include the greater range. It takes a while to get out of first position playing, but once you make that leap, you shouldn't be limited by the instrument your're playing. I'm removing the physical block to the upper notes. Actually using them is up to the players/composers. 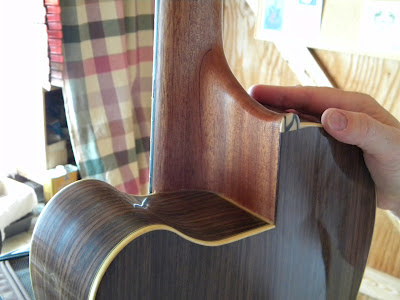 Your site is full of what you call technobabble, you have a very scientific approach to building, like your examples of Chladni patterns.  How has that affected your approach over the years?


I started looking at Chladni patterns in the 70s. At the time there was very little published research regarding how this related to guitars. It was primarily violins and even that was not in great depth. So it was completely guesswork. Over the decades various people started publishing on this subject. Alan Carruth's work published in American Lutherie in the 90s and Trevor Gore's recent design book are good examples.
My own approach changes all the time as I try to relate what I see in spectral analysis and chladni testing to what I hear. It's a very complex subject that is complicated by the fact that hearing is such a limited sense in humans. In the end it's all about how a guitar makes you feel as to whether you want to play it again and again. 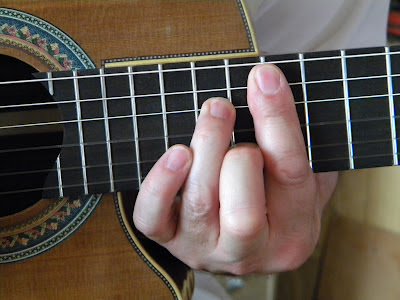 
I view building an instrument in the same category as composing a piece of music. Many builders make their guitars all the same, copying some well known pattern. But that's the same as playing the same piece of music over and over again. Aside from being boring to do, it's boring to everyone else. I'm improvising with the wood as I build. In the process I learn a lot that just copying a pattern can't teach me. The instrument is more interesting and has it's own identity because of this. That scares a lot of people who think that guitars should all be the same.


I get the feeling you don’t build anything very traditional.  You are drawn to the new and innovative? 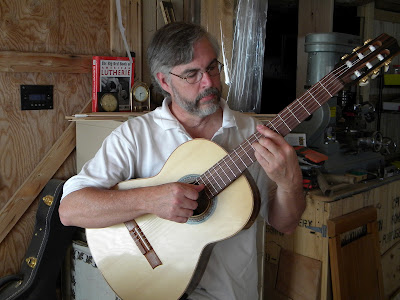 The steel string guitar you've been displaying lately has an adjustable bolt-on neck, a sort of pie-slice shaped sound hole in the upper bout and a voicing port in the lower bout.  How did you arrive at all of this?


The upper bout sound hole was to be able to access the neck adjustment. The shape of the hole was entirely based on the shape of the area involved and the voicing port was based on my understanding of the properties of resonant air masses and my desire to adjust the sound of the instrument dynamically. It all does what it was designed to do. There are many variations on these themes and I'm exploring them in newer guitars.


Is everything done in your shop by hand?


That is a matter of definition and most people don't have a clear one. That's why companies get away with calling instruments that are obviously built on factory production lines "Handmade". So in commerce today, the term is meaningless.
However, to answer the spirit of the question, compared to how a guitar would be built in a factory, absolutely yes. Compared to how Antonio Torres built guitars in 1860, not so much. I've done it both ways and I lean towards the latter.


You are planning on employing a small team to start building soon and making your guitars available.  Will there be a focus on a specific design and when and where can people start buying these instruments?


Employing is perhaps the wrong term to use. I'm attempting to combine the skills of a few experienced builders to create a new line of instruments based on some of my design principles. We will be going in together on these instruments and see if some of the variations we come up with speak to people enough to justify further efforts. The marketing strategy has not been fully vetted yet, so if anyone is interested they should probably just email me directly.

Folks, you can browse Chuck's site, C. F. Morrison Guitars for a ton of interesting stuff and find his email there if you are interested in contacting him about his work. 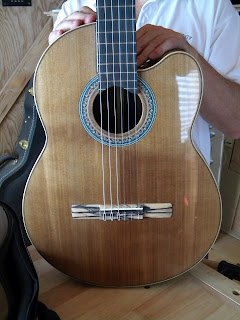