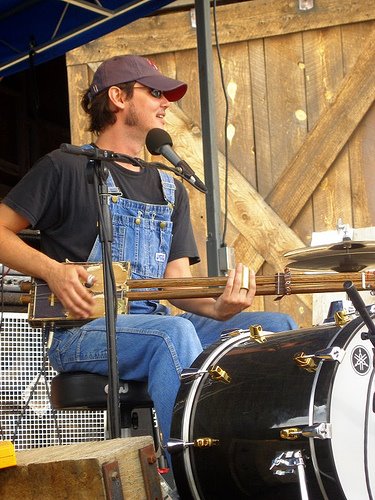 A friend of mine has been lucky enough to see Richard Johnston many times on Beale St in Memphis and by all accounts he kicks some serious butt.
If you aren't familiar with him he usually is a solo performer playing guitar, singing and the drums via a special setup operated by just his feet. He also plays a cigar box guitar quite often. You can tell when he is playing the cigar box guitar because it is strung with a bass string to improve that over all groove thang in the performance. If you know what I mean, and I think you do.
This is a soundboard recording from: The Deep Blues Festival at Washington County Fairgrounds, Lake Elmo, MN on July 18th, 2008
If you like this style you should also check out John-Alex Mason I've been going to his shows in Colorado for a long time. He used to do just the acoustic blues but Johnston showed him how to set up the one-man-band deal and that's been his dominant style for a couple years now.

A documentary has been produced about Johnston

Visit Richard Johnston on the web!