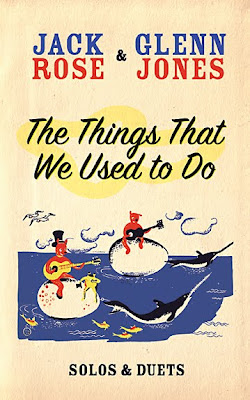 If you haven't seen the trailer for this yet, check it out.

As you can see, it’s very nicely shot with some great angles on the playing. It definitely has plenty of good camera work for the guitar geek in me. I love the pans across the strings, especially that low E string when it’s been tuned down to C and is floppin’ all over the place. 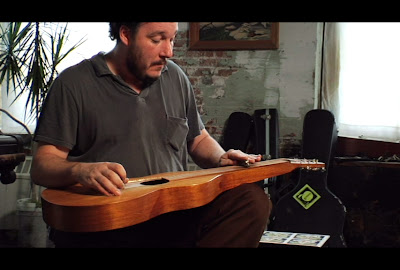 Then Jack takes over for the first studio section. First up are the lap slide songs,
Gage Blues
Revolt
Levee and
Song for the Owl 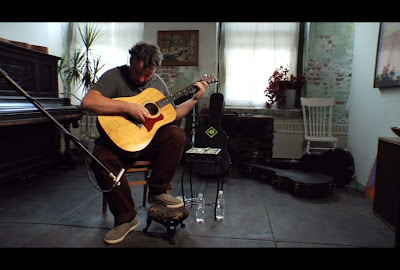 
Rose gave up playing the 12 string at some point of his career, so we don’t get to see him play that instrument. But it’s all good because Glenn Jones is up next and takes us thru his world of bizarre 12 string tunings and partial capos. In some ways it’s surprising that these guys played together when you see them play in this DVD, there’s a real shift in the feel as you are watching this video. We go from Rose’s muscular playing that is very bluesy to Jones with the more expansive, longer, intricate pieces, nearly all from the recently released “Barbecue Bob in Fishtown.” 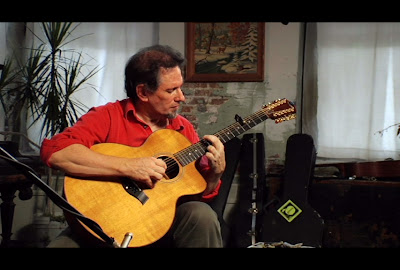 Jones starts us off with
Redwood Ramble Misremembered
Barbecue Bob in Fishtown
1337 Shattuck Avenue, Apartment D
A Geranium for Mano-a-Mano
David and the Phoenix and
A Lark in Earnest
The last song is new territory for Glenn, a piece for the banjo. 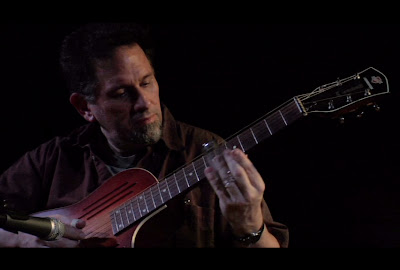 At this point we get to see some concert footage of the two, playing separately, in a club in Philly. Continuing with Jones in the live performance we get two more songs from “Barbecue Bob in Fishtown” and that just about covers the entire release! The live set is three songs, one each on 6-string, banjo and a slide medley on a reso-guitar.

Closing out the DVD is an interview with the two musicians. This may be my favorite part of the entire DVD. I have always been rooted in the acoustic guitar. I’m not sure I can get into any deep philosophical reason for it. It’s always just been the instrument that spoke to me. Even before I discovered the blues of Mississippi John Hurt, Ackerman’s stuff and of course Fahey, I was in love with the acoustic. I always loved the rock songs that had am acoustic base to them. Like the backbone of Heart’s “Crazy on You” and Led Zepplin’s “Babe I’m Gonna Leave You.” I don’t know if it’s the clichéd sounding “well it’s organic” or what there is about it. But while I have always really appreciated the electric and the power it wields, when it gets down to it I would rather play an acoustic.


So I really identify with how Rose talks about starting off on the acoustic and eventually coming back to it with all that electric playing in the middle. As much as I love electric players of all kinds I want to listen to it more than play it.

Name dropping is always a useful part of any interview to discover new artists. Byron Coley even mentions Ragtime Ralph!

Glenn talks quite a bit about driving Robbie Basho around on an east coast tour, very interesting. The highlight might be Glenn’s impersonation of Fahey, it’s quite funny.

This is a fantastic deal for the money. Nearly two hours of great music and a 37 minute interview. This DVD really has it all, duets, solo performances by each, both “studio” and in a live setting and to top it all off, an interview of the two.

Head on over to Strange Attractors Audio House and pick up this DVD ! Regular shipping is free, even the big river company can't beat this price.