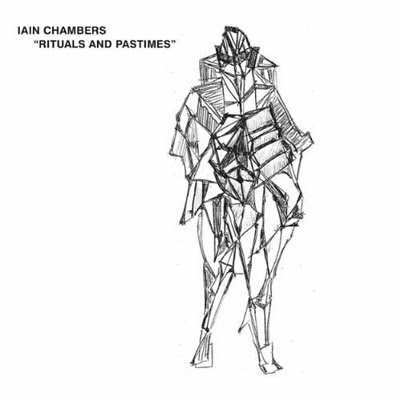 Rituals and Pastimes is a solo guitar effort from Iain Chambers.  Chambers started playing guitar in Southampton (UK) in his late teens. He didn't hear John Fahey's music until much later after being introduced to it by a friend.  Discovering Fahey opened the door to the range of influences running through the so called Takoma School (Fahey's circle of fellow American Primitives) from Charlie Patton to Bartok. He particularly admired Charlie Patton's use of slide – how his music seemed focused and aggressive.

Despite, or perhaps because of his influences, it seems to me that Chambers isn’t trying to be someone else.  His playing is his own and you can tell that he is comfortable with his stops and starts, his pauses and tempo changes.  They are his; he is not emulating some other player just to be like them.  Chambers is feeling his music as he plays it.  This is an effort defined by pieces that refuse to be easily categorized or labeled.  This isn’t a sterile recording, strings snap and rattle, there’s the sound of deep body thumps and a slide hitting the fretboard.  All of this pleases me.

Glenn Jones after hearing a demo of “Rituals and Pastimes”: “The best tracks possess deeply expressive qualities, and make me remember why I wanted to take up the guitar..

Let’s get to a song or two…I know the title says “Port Authority Bus Station Blues” but this is a guitar calling me from a hidden cave on a craggy mountain top. It calls me to seek it out, scrambling up the mountain side to seat myself at its feet with my questions, and when it is done I can’t remember the answers or even the questions, only the journey.  Then “Ed Mark” issues forth from the mountain again on track five, calling me back with the lure of the slide, I can’t resist.

Chambers shifts easily in tempo, style and approach throughout the effort and within the songs themselves.  It’s not a quick and simple listen, it’s not background music, it’s not slick and glossy…that’s why it’s a good one.

New comments are not allowed.