The Genius of Les Paul - Multi-Trackin'

Yeah, I know I'm a lot late on this. Been busy, or lazy, take your pick! 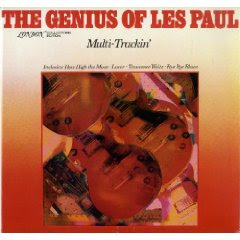 Sleeve Notes from the 1979 London Records release:
There is no electric guitarist performing who is not indebted to Les Paul. His sound and the hardware he invented to achieve it is revered by the likes of Jeff Beck, George Benson, Eric Clapton, Pat Mortino, Pete Townsend, Richard Betts and Jimmy Page.
Not since Thomas Edison-to whom Les Rightly compares himself-has anyone contributed as much to recording technology. He invented sound-on-sound, making it possible to record one signal independently of an entire program. This process, also called overdubbing, was first introduced on his early fifties hits with Mary Ford, where he played between three and twelve guitar parts and she became the first double-tracked vocalist. He "discovered" echo or delay, a dimension which has totally reconditioned listeners, perceptions to a "depth-of-field" or an acoustical space surrounding the source. Consequently he is responsible for spawning an entirely new area of study and systems called psychoacoustics. (Editors note: I've seen the psychoacoustics in concert!)
Les Paul perfected the solid body electric guitar, was the first to put two pickups on one guitar and the first to build a guitar with 14 frets. Since their introduction in 1952, the instruments he designed for Gibson are the ideal of the majority of electric guitarists.
Les is not only an inventor, he is a capital musician. When he came to New York City in the late thirties he fell in with the best. Art Tatum, Ben Webster, Louis Armstrong, and Charlie Christian. He worked in Fred Waring's Orchestra then went on to back Bing Crosby and the Andrew Sisters. In 1949 he had his first of what would be a long string of hit records with the Rodgers & Hart standard "Lover".
Les retired from music and performing in 1965 to concentrate on developing new inventions. But in 1967 he was coaxed back into recording again by London's Walt Maguire. The idea was to rework some of the original classics-"Lover", "How High the Moon", "Tennessee Waltz", "Bye Bye Blues", and "I Really Don't Want to Know" -with his updated systems. You hold the results in your hand as, The Genius of Les Paul-Multi-Trackin' (originally released as "Les Paul Now" in 1968).
Since 1975 Les has been active again in performing and recording; last year he won a Grammy for his collaborations with Chet Atkins called Chester and Lester. -Peter Hay 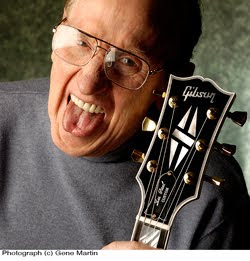 My thoughts-
Interesting that this was first released in 1968, when solo guitar was going strong; Takoma was about to release 6 and 12 string by Kottke, Basho was up to several releases, Fahey, of course was well into his career. Interesting because despite the genre differences and the emphasis on creating layers of sound, specifically layers of electric guitar, this is arguably (and i like to argue) a solo guitar album. There are no vocals, and yes, there is some other instrumentation, but it is really just light support for Les' amazing playing. The emphasis here is to put multiple guitar parts together for the sake of the song as a whole.
The first time I heard this I was blown away. This was one of those moments I can point to as being very important to my development as a fan of the guitar. My grandmother owned this album and thought I would like it. Well, being about 17 and very into Led Zepp, I had a good laugh that she would own anything I might like. Grandma got the last laugh on that one! I, ahem, "borrowed" the album periodically before getting my own copy. I now own two copies, if anyone out there is into the vinyl thing and is interested in buying one, let me know, I am willing to part with one of the two.
Some good thoughts about Les:
Mixonline