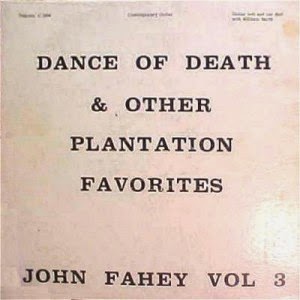 Outtakes, fragments, unreleased songs. John Fahey recorded a whole host of material over the course of a couple days. Stephen of the John Fahey blog originally uploaded lots of Fahey outtakes and unissued material. This upload was hosted on his blog up until around 2007-2008. All of this content has since shown up on blogs across the internet. But these sessions are the one thing that has not been re-uploaded. Aside from tagging the MP3s with proper titles, I present it here as is.

It seems with the advent of Spotify and the ability for content owners to throw together compilations, a lot of random outtakes and unissued studio material has shown up, labeled as “Best Of” comps and the like. It is a heap of a mess, but if you search through there, you can find many gems.

The full, unreleased song, “TV Rag” aka “The Television Rag”, is one cut that has not shown up in those comps referenced above. The only place it has since existed was on Stephen’s blog. Fahey taught Ragtime Ralph, aka Ralph Johnson, aka Blind Brand X, the “TV Rag” when Ralph hosted a show of John’s in the 80s. Ralph’s great version appeared on his release “Volume 4”.

John Fahey - The Dance of Death Outtakes
Silver Spring, Maryland (1965)
Download it HERE
Thanks to Rag Lore for these and for the text!