American Primitive on the Web 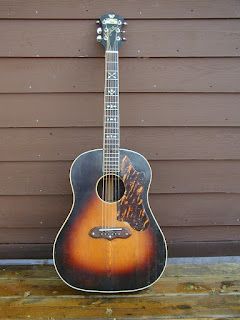 It's not like I'm the only guy out here posting on the internet about John Fahey or his influences.  Today I present a few sites that you may want to check out if you don't know about them.

First up is a recently launched site by Ryan Leaf.  It's a beautiful site and Ryan has posts up about some of my favorite guitarists, Glenn Jones and RC Johnson to name a couple.  Both of whom he has hosted for house concerts.

He also does some nice playing himself.


Check it out at These Paths We Tread.

Here's a guitarist, Malcolm from France that emailed me a while back praising my blog.  Well that's a sure way to win my favor!  :)  Malcolm plays some of his original tunes on Youtube, so lets see a bump in those views.  You won't be disappointed!!

Up next is Daniel Bachman.
A guitarist (and more) formerly know as Sacred Harp.  The German label Dying For Bad Music has released a new 7" from Bachman.  Check it out.

Check out the label site and a search for American Primitive turns up for interesting artists.  Check out Nick Castell.

This is of course only a small sampling of what you can find out there if you just look around.