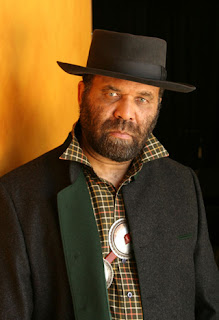 Folks, I'm so proud to announce that Delta-Slider is an official sponsor of Otis Taylor's Jam Workshop Festival.  The festival is in only it's second year and I'm thrilled to be a part of it.  Artists lined up for the workshops are of course Taylor, Bob Margolin, Tony Trischka, Don Vappie, George Porter Jr., and Mato Nanji.  The fire-power in the banjo department alone should be getting some peoples attention!

From the festival site:


Boulder Colorado resident Otis Taylor is a world-renowned musician whose unique style of “trance-blues” music defies easy categorization. While drawing upon elements of early American Blues, and even earlier African music Taylor has been called “arguably the most relevant blues artist of our time” by Guitar Player magazine. In November of 2010, Taylor found himself with a rare fall month at home in Boulder rather than touring in Europe. At the last moment, Taylor decided to hold a Trance-Blues Jam Workshop. With little time to market the event, Taylor sold out the room and had over fifty musicians, educators and singers join him at the Boulder Outlook Hotel for a glimpse into his approach to the creation of music in a live environment. A video overview of the 2010 workshop can be found at www.otistaylor.com. The event culminated with a public jam session during which one song was played and musicians were woven in and out with each bringing their own energy and perspective to the moment. The success of this event has lead Taylor to pursue the development of an annual three day Trance-Blues Jam Festival which will be held in Boulder Colorado on the weekend following Thanksgiving.