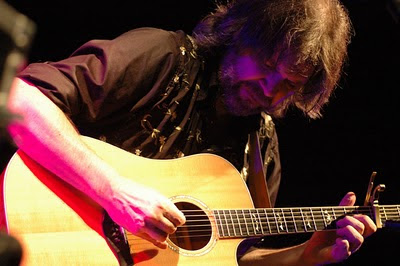 I just got home from a Beppe Gambetta house concert just up the road in Lyons, Colorado.  What a great show.  I'm not sure how this guy has slipped my attention but I suppose it has to do with that whole flatpicking thing that I'm not much into, most of the time.  This was dangerously close to a bluegrass show.

Beppe is a charming entertainer and comfortable telling stories about his songs.  I love that.  He also tells banjo jokes.

What do a banjo and Beppe Gambetta have in common?  Dixie Breakdown.

Beppe plays it on the 6-string.


And by the way, he was playing that R. Taylor tonight and it's a beauty.  What a great looking and sounding guitar.

Beppe plays just about anything you can think of, his tribute to a meeting with Pete Seeger called Hobo's Crossing to actually playing and singing a Woody Guthrie song, Hard Travelin'.  Fantastic!  He would know a bit about hard travelin', he's on the road about 270 days a year and that is good for you and me.

Get on over to his site to see when he is a comin' 'round the mountain.  Beppe Touring

He also played a Scottish folk song, Italian love song, plenty of American roots of course and breaking new ground with his solo guitar interpretation of an opera.  Oh yes, yes he did.  And it was fantastic.  The set was well balanced with a few vocals but plenty of instrumentals to keep the guitar soli crowd happy.

Folks, Beppe Gambetta is a guitarist you shouldn't miss. 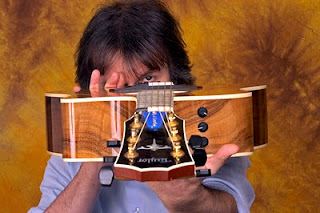