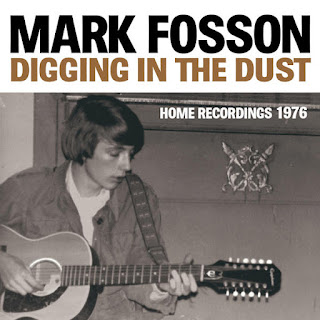 from the Fretboard Journal
In 1976, shortly after acquiring his 12-string Epiphone guitar, Kentucky-born guitarist Mark Fosson recorded a set of demo tapes that were eventually sent to John Fahey’s Takoma Records. Fahey liked what he heard and signed Fosson shortly thereafter, going so far as to book studio time for the musician. Unfortunately, Takoma ran out of money and was sold to Chrysalis before the album ever came out, leaving Fosson’s studio recording in its wake. The finished album wouldn’t be released until 2006 (as Drag City Records’ The Lost Takoma Sessions).

On June 26, 2012, Tompkins Square is releasing Digging in the Dust, the stunning 1976 home demos by Fosson that led up to that lost Takoma record. The guitarist recorded himself in his living room, using a reel-to-reel tape deck and a rented microphone. He performed ten original compositions and one arrangement of “Back in the Saddle Again.” Though today he’s known more as an Americana singer-songwriter, these tapes are a testament to Fosson’s unique talents on 12-string guitar. If you’re a fan of Fahey, Leo Kottke, Peter Lang or more recent virtuosos such as the late Jack Rose, we think you’ll love this collection of forward-thinking guitar instrumentals.