Folks, I'm proud to present to you a recording by Andrew Stranglen, available for download.  If you aren't familiar with Stranglen's work you need to check it out.  This is an older one that was never released for sale.  But he has those too, be sure to check the links at the end of the post.  His "Harken" release made my Tops of the Decade list.  So without further ado, take it away Andrew...

Def.1   An American colloquial expression of exasperation
at the impermanence of life;   An expression of loss of
a close friend or relative.  “Doggone it, the doggone
dog is done gone!”

Doggone Gone Dog was originally conceived while playing around with two Teac reel to reel tape decks.   And 12-string acoustic guitar with all lighter gages tuned DGGDGD.
Deck 1 is the record & supply deck, and deck 2,  set some few feet away is the playback & take-up deck which plays back into deck 1 opposite channels.   This creates a delayed repeat or long echo that slowly fades as new audio material is continually added, creating riffs that morph throughout time.  Other noisemakers on this collection include an electric guitar(Harmony Gibson S-G copy), kalimba, jaw harp, tambourine, voice, whistling, electronic cicada toy, and on the Bonus track (Jivas extracted from Splendor)  I bring a harmonica into the mix.

Here is the new and improved “Doggone Gone Dog” album originally made in 1999 with a limited issue of probably no more than 20 cdrs ever produced.   I've remastered it for normalization and elimination of some pesky resonances.   It sounds better than ever, and I still enjoy it a lot!    I'm happy to give it away, and hope you enjoy it as much as I do.
Notes on the cover art

Front cover: Dog + Lightning = Electrik Dog => Lectrikdog(as currently).
A collage of a lightning sky turned upside down, midground is a blue disc shaped birdbath
sized fountain in front of which: a wolf type dog is eyeing us whilst licking his snout for a better whiff. 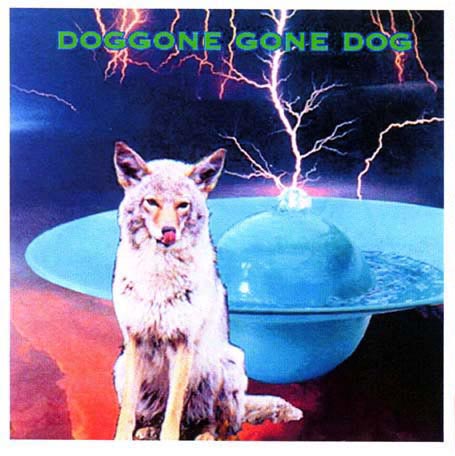 Back cover: another collage I made, “Magic Dust”,  it's what the little girl has in her container, which she's opening whilst looking apprehensively at the undulating reddish-orange blob which is creeping towards and over the boardroom table, or is it creeping away?
Is Mr. Executive attempting to warn her?, or is he simply freaked out about his own situation?  There is a radio telescope array seen outside the windows of the boardroom. 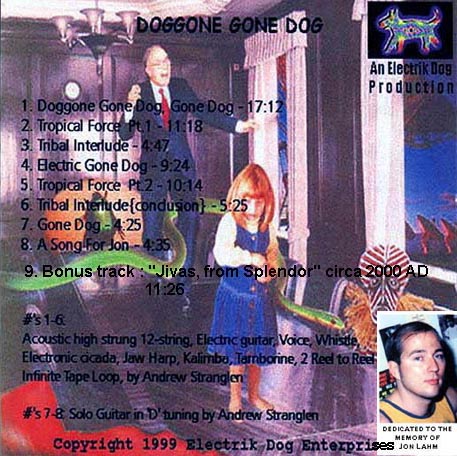 Notes on the Songs

“Jivas, Extracted from Splendor”
This piece was made in 2000 also using the dual reel to reel technology.
To me it sounded like music to accompany Jim Woodring's “Frank” in his world of the Unifactor, see http://www.Jimwoodring.com , or
http://www.rudyrucker.com/blog/2009/02/04/jivas-and-yuels/
see also http://en.wikipedia.org/wiki/Jiva

Ralph Johnston said recently upon hearing Jivas,
“'Twas a curious little field holler performed by nanobotic nematodes while creating  the magnificently monolithic ice crystal cathedrals of the Skapa Flow”.
then:
“Andrew...hiowdy!  I indeed love "Jivas"!...check out Scapa Flow on Wikipedia...they will give you a much better, detailed description than I ever could...at first my impressions were of my late pooch Kyri ecstatically rolling around in my back yard...enthralled with a cookie treat and revelling in my rapt attention to her canine antics...but then...sinister images began to appear...images of nanobotic nematodes and huge chrystalline ice structures being constructed in places where humans labored and fought...for truth...justice...and the...American way...sorry...I loved the 1950s Superman TV series starring George Reeves.”

I figure if Ralph likes it, well that's a job well done then.
ENJOY!
Andrew