When I first heard SRV in 1983 I couldn’t believe my ears. Dominating the charts at the time were people like Michael Jackson, Men at Work, the Police, Hall & Oates and Prince. Hmmm…nothing bluesy about that. Although that isn’t really a fair way to look at it, I had yet to really discover a way to find music other than what was being played on the radio. So the fact that SRV was able to get on the charts in the Eighties was a stroke of luck for me. The Eighties would proceed even further downhill with chart toppers like Culture Club, Wham!, crappy Dire Straits and ZZ Top efforts and the eventual rise of the hair bands. Sometimes I think SRV and the music he opened up to me was all that kept me sane. Hyperbole, you say? Perhaps.
I became a huge fan and went to nearly every show in Colorado including his first tour through town at a great little venue known as the Rainbow Music Hall, that was Aug. 16th, 1983. The show cost me $5.20. In all I saw SRV 9 times and I even got to meet him backstage at Red Rocks in 1989. They wouldn’t allow pictures but here is the autograph I got along with all my ticket stubs and the backstage pass. 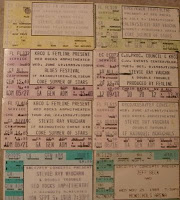 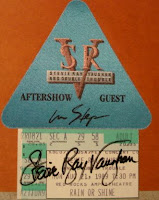 I’ve also posted some of the t-shirts I collected over the years.

Sometime in early ’89 the record store I worked at got a new Columbia rep and I was on him from day one about Stevie. When is a new album coming out? When is he coming to town? Apparently he realized I was a pretty big fan and not only did he get me backstage but he got me this totally cool bright green SRV shirt to boot! Dig those double-pleated pockets! I think I could fit a laptop in each one. Ah well, the embroidered SRV is pretty cool. 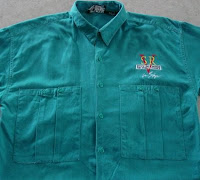 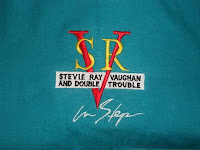 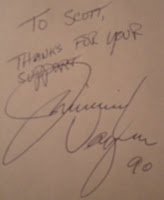 Dallas. It was a mere months after the death of Stevie and he had been scheduled to play for us. Instead, Jimmie got up there and gave a eulogy of sorts and showed the debut of the video of Tick-Tock from the Family Style release. There wasn’t a dry eye in the house. Jimmie was kind enough to sign an autograph for me later that day.

The 2007 release of Solos Sessions & Encores has made many of these available, but there are still a few missing. Fortunately I have some of them on vinyl. I’ve also included a couple that are still available but that the average SRV fan may not be aware of and that were not included on the Solos Sessions & Encores release. There are some other appearances by SRV with unlikely artists such as Don Johnson, Teena Marie, Stevie Wonder and James Brown. Most of these are available or despite Stevie’s work are too painful to listen to so are not included here. 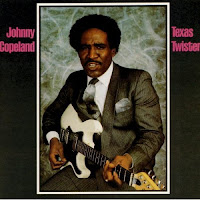 Solos, Sessions & Encores, Cut 3 is “Don't Stop by the Creek, Son” w/ Johnny Copeland from the 1983 Texas Twister, (now out of print). But SRV was also a guest on “When the Rain Starts Fallin'” a cut that is not included on the Rounder re-release of 1990. So I have included it here.

Cut 4 is Miami Strut, an instrumental with A.C. Reed from 1987’s  I’m in the Wrong Business. Stevie lent a hand on two more cuts, “I Can’t Go On This Way” and “These Blues Is Killing Me”. 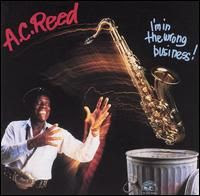 Again, included here.
Cut 5 is Na-Na-Ne-Na-Ney from Bill Carter’s Loaded Dice, 1988. This one must have got by me back in the day. I don’t recall ever hearing about it so I do not have it, nor can I find it. If anyone out there has it let me know.
After that there is some unreleased and or live stuff, followed by one cut from the David Bowie release.
Anyone ever notice Bowie “playing” the guitar solo in the video of Let’s Dance? With a pair of white gloves on… It’s just a video, I know, but to insinuate that he is playing those tasty licks? Lame.
Ok, a few more things to add. 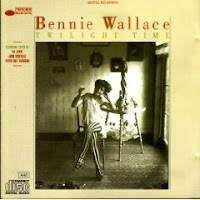 In 1985 Blue Note released Twilight Time by Bennie Wallace. SRV on a Blue Note jazz release, amazing the recognition he was getting, he was on top of the world and everyone wanted Stevie to play a solo on their record. On an album full of guests including Dr. John, Stevie made two appearances, “All Night Dance” and “Trouble in Mind”. This one is out of print. 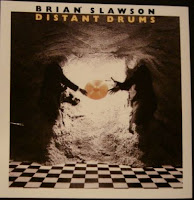 Distant Drums by Brian Slawson (1988) has got to be one of the more unlikely musical hookups a blues guy like Stevie could have made. This is a very cool piece. Be sure to check out the pictures of SRV & Slawson here.

Famous Blue Raincoat by Jennifer Warnes, (1986) is another rather unlikely meeting of the minds, but I think it worked well. Stevie plays some nice tasty 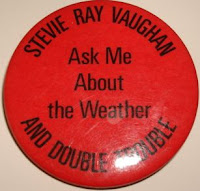 licks on this one. I actually own the 45 rpm single of this one.

Get the music HERE
Hope you enjoy.