John Fahey and the Williams Brothers

John Fahey became friends with the Williams brothers who lived on Sligo Mill Road in Takoma Park. Elmer and Harold were born in 1925 & 1924, respectively. In 1966 Fahey was considering issuing an album of the Williams Brothers. (Sourced from "The John Fahey Handbook" by Claudio Guerrieri)

You can read about Fahey meeting and hanging out with Elmer Williams in "How Bluegrass Music Destroyed My Life" starting at page 267.

Check out the D.K. Wilgus Collection at the Ethnomusicology Department of UCLA (http://digital2.library.ucla.edu/) has various unreleased Fahey material including a tape with the Williams Brothers, as mentioned in the DOD discographical notes recorded by Richard Spottswood.

From the Dance of Death liner notes:

...early 1959 Spotswood's ancestral home, Westmoreland Hills, Md.
JOHN FAHEY, ELMER & HAROLD WILLIAMS, KELLY
John - g=1, Elmer - g=2, voc. & g=3, Harold - voc. & g =4
On Doing An Evil Deed Blues - 1 Railroad Bill - 3,1
Buckstonk Blues - 1 Easy Ridin Buggy - 3,1
Brenda's Blues - 1 One by One - 3,1
John Henry - 2,1 If You Feel Like Your In Love
Blues in E - 2,1 Don't Just Stand There 3,1
Blues in C - 2,1 Tell Me Who's Been Fooling You - 4
Add vocals by Elmer, Harold and Kelly at various times
Rock Is My Pillow
The War is Over
So far as I can determine, these are the only known recordings by the Williams Brothers and Kelly. Their home was once located on New Hampshire Ave just beyond the DC line, presently the site of either a Safeway or a highway. By wise and judicious placement of modern highways, the local governments of suburban Maryland have increased property values by simultaneously creating easy access for modern transportation and by ridding the countryside of unsightly negro and poor white shacks. As a result of this policy there seem to be no negroes or farmers left in the lower half of Montgomery county. The suicide rate is rising. - 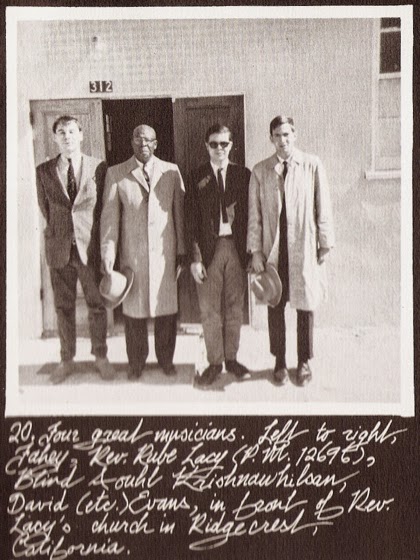 These are incomplete and some cut off in the middle, too bad, pretty good stuff.

Thanks to JohnFahey.com for the Dance of Death liner notes and Malcolm Kirton and Richard Swan for pointing these out to me.

In addition you should find some other interesting material, the Rev. Rubin Lacey with Fahey on guitar, interviews with Blind Johnnie Williams and Rev. Ishmon Bracey.