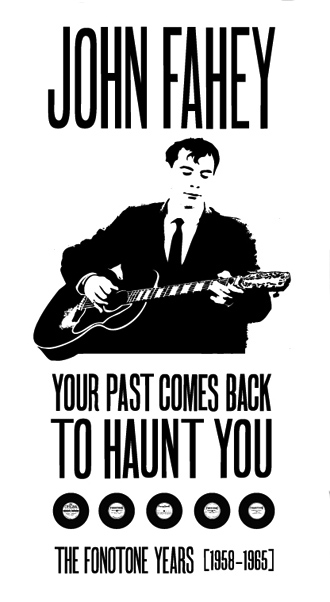 Ah, I warned you!  An extended Fahey Week, and no complaints I'm sure.  As many of you know a collection of John Fahey's early years of recordings have been in the works for some time.  And I think we all expected a pretty nice set of music to be produced.  But as you will see, this has been a phenomenal project.  Glenn Jones has been at the center of this effort for years and I asked him if he could tell us a little about it.  Well he's telling more than a little and I think you are going to find this very interesting.
Thanks Glenn for sharing with us a few of the tantalizing details of what we have to look forward to, and thanks for all your hard work!

The road to the Fonotone John Fahey box set, containing nearly all of John’s recordings for Joe Bussard, began, for me, in 1978, when I ordered all of John’s available Fonotone records by mail. A few weeks after Joe cashed my check, a box of 45 RPM acetates and a 12” and 10” LP, each with blank covers, arrived in the mail.

Each record, I discovered, was a unique object – each was individually hand cut (not pressed); each was made from a new pass of the master tape; each label was typed up individually and glued onto each disc.

My guess, however, based on the fact that these records almost never turn up for sale, is that Joe probably made less than 50 complete sets. (I know of only five people who mailed away for sets, including me.)

A tiny handful of Fahey Fonotones have turned up on eBay, and in 30+ years of scouring used records stores, I’ve found exactly one Fahey Fonotone 78.

Sharp-eyed fans originally learned that John recorded for a label called Fonotone via the liner notes that came inserted with the first two pressings of Fahey’s Dance of Death. For nearly four decades now, a handful of us have been trying to make sense of this material. That’s nearly 40 years of debate, bafflement, hair pulling and speculation on the part of a good half-dozen or more Fahey scholars in the U.S., the UK, Australia, and Germany.

This box set comprises virtually all the extant issued and never-before-issued recordings that Joe Bussard had of John. Many were recordings Joe made, or, after John moved to the West Coast, come from tapes that John sent to Joe, usually in exchange for 78s he was after.

The set has been more than 10 years in the making. It’s involved the work of nearly half a dozen engineers in nearly as many
studios. It required trips from Boston to Oregon, to Louisiana, Maryland, Virginia, Washington state, and Atlanta. It includes contributions from the most knowledgeable Fahey experts on the planet.

The set’s becoming a reality had so much going against it, there were so many hurdles, roadblocks and detours, I despaired of it ever coming to fruition. It suffered many kicks in the shins along the way, and (at least!) three major setbacks (that I can talk about):

--First, the death of John Fahey in 2001 meant we had to get approval from his estate in order to continue the project – which proved a lot harder and more involved than getting approval from John. (This project comes with the full approval and cooperation of the Fahey estate.)

--Second was Revenant’s decision to suspend business several years into the project (more on that below).

--And finally, one of the biggest blows, the loss of virtually everything -- every track committed to computer; every edit, every speed correction, every EQ made; the order of tracks -- four years of work! -- all down the drain, due to our original engineer’s computer crashing and his not having backed up his system.

This meant restarting the project from scratch, some seven or so years into it.

But, after all the effort, the heartache, the death, the rebirth, I can say that it feels, finally, like it’s done (or nearly so – we’re still working on layout and design), out of my hands, and nearly into yours. It feels like a pretty significant accomplishment -- certainly one of the achievements I’m proudest of in my life.

Though not every question will be answered by the set (and, being devoted to Fahey, that’s maybe as it should be), every question has at least been asked, and every possible scenario explored.

The set will consist of five CDs, a 78 RPM record, a 12 X 12 book (somewhere between 60 and 80 pages long), several inserts, all housed in a wood slipcase. There will be contributions from Malcolm Kirton, Claudio Guerierri, Eddie Dean, Byron Coley and others; there is a previously unpublished Fahey interview, by Douglas Blazek, from 1968; there are reminiscences from Michael Stewart, with whom John recorded, and R. Anthony Lee, one of John’s close childhood friends; there will be photos galore, reproductions of every Fahey Fonotone record label, color inserts, and lots of memorabilia.

Of the issued material, only the hardest of hardcore Fahey fans, the ones who to took the trouble to write Joe Bussard in the ‘60s and ‘70s to order the 78s or 45s from him by mail, will have heard any of it.

And even the stuff that made it into the hands of a few fans has never been heard at the proper speed, since Joe’s 78-RPM cutter cut fast (records played back at 78 RPM were slower than recorded) and his 45-RPM player cut slow (played back fast).

The music, also, has never been heard in such good fidelity, all of it being transferred from Joe’s master tapes or from clean copies of the actual discs themselves, in the few instances (four tracks) when Joe’s master tapes could not be located.

We spent nearly a week with Jane C. Hayes, John Fahey’s mom, in Louisiana, who gave us something like 150 photos, almost none of which have ever been published. Many will appear here for the first time.

I began the actual work on a reissue of the Fonotone Fahey material (for Dean Blackwood’s and John Fahey’s Revenant Records) back when John was still among us. Dean called me up and asked if I’d like to produce a set of Fahey’s complete recordings for Fonotone. Not having the vaguest notion what might be involved, or what I was in for, I said, without hesitation, yes.

My last visit with John, the summer before he died, was to discuss this project.

In the three or four years after John’s death, we made good progress on the set, but then, inexplicably (to everyone, including me), things ground to a sudden halt.

Why? It’s a long story, and it took a long time — a couple years -- to sort itself out, during which time I was either in the dark, or once I got the story, unable to say much, partly because there was a lot I didn’t know (though Dean was pretty forthcoming with me, there were legal issues that couldn't be made public, things he wasn’t allowed to discuss with me, or anyone), and partly because it was my hope that once things were sorted out we could pick up where we left off.

A happy outcome, however, was far from certain.

The upshot was that an expensive and protracted legal battle followed the issue of Revenant’s Albert Ayler box set. Legal fees ate up Revenant’s finances, and shut down everything in the Revenant pipeline, including the Fahey project.

That experience, ultimately, left such a bitter taste in Dean Blackwood’s mouth, that he decided to call it quits, and got out of the record business altogether. (Revenant was one of the very best labels going, as anyone who bought their Patton or Ayler or Beefheart boxes, or any of the American Primitive volumes, the Harry Smith Vol. 4, or Fahey’s Red Cross, knows.)

As things unspooled, the realization that all the work we’d done might be for naught just about broke my heart.

But in the midst of Revenant's legal blood shedding, Dust-to-Digital came charging over the horizon. They’d issued a four-CD set containing a wide selection of Joe Bussard’s Fonotone recordings, after which they also began looking into reissuing the Fahey Fonotone recordings, the rights to which Bussard had originally sold to Revenant.

As things with Revenant wound down, Lance Ledbetter at Dust-to-Digital and I finally reached out to one another, encouraged by the haranguing of our mutual friend, Jack Rose.

Eventually I put Dean and Lance together, and they brokered a deal whereby the project became a Revenant / Dust-to-Digital co-production. The set will, as is only fitting, bear the imprint of both labels.

As for Dust-to-Digital, truly, I can’t think of a better label to have seized the reins of the project. Their Art of Field Recording volumes (both 4-CD sets) are among my favorite releases of the past few years. Their packaging (by Susan Archie, Revenant’s designer) is beyond terrific.

Besides the Fonotone collection, there is in the D2D catalogue an essential album of vintage Sacred Harp recordings, one of the best gospel collections ever issued (Goodbye Babylon), and much much more.

Everything they put out is lovingly assembled, comprehensively annotated and well worth investigating.

Limited to 2500 copies, the John Fahey box set (titled Your Past Comes Back to Haunt You) will be, for Fahey fans, a treasure trove. (If the child is father to the man, it’s not such a stretch to see Blind Thomas as the father to Blind Joe Death.) Look for it (really!, finally!) later this year