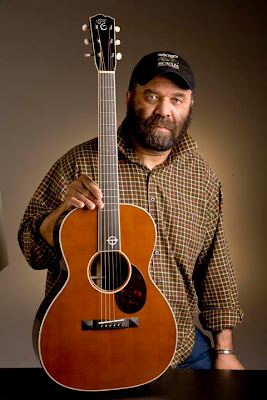 It seems a bit odd that Taylor lives in Boulder and yet this is the first time I've seen him play.  So I was excited to finally get to see what I was sure was not going to be a run-of-the-mill blues show.

Taylor opened the show playing  a Telecaster, solo.  Nasty Letter form his "Truth is Not Fiction" release.  He then brought up a band member whose name I can not recall (sorry dude) to play the djembe and played a stripped down version of "Lost my Guitar" from the Pentatonic Wars and Love Songs release.

Taylor likes to build his songs in layers, it's a rather obvious trait you notice on his studio work.  What I didn't expect was that he was going to utilize a member of the band one person at a time.   By the third song he had added the drummer, Taylor is still playing the Tele.  But after a couple rockin' songs he makes sure we are all on our toes by hushing the drummers and performing a field holler.

That was Taylor's segue to introduce the next band member.  Except in this case it was band members, plural.   A gospel choir.  Well, part of one, four members to be exact.  They sang "Amazing Grace" to warm us up a little and then it was back to Otis Taylor music...with a choir.  "Looking for Some Heat," again from Pentatonic, got the choir treatment as did the rest of the set.  That was it for the band.  Taylor took care of all the string work.

The choir was an interesting addition and at times I thought it added a lot to the performances but once or twice they were little more than backup singers.

Taylor is booked with the whole Sheryl Renee choir for the Telluride Blues Festival this year.

After a short break to sell some CD's, Taylor was back and I was happy to see a chair on the stage and shortly a banjo.  Taylor did one solo piece and then had the drummers join him for one more banjo piece.

The choir was soon back as well as the electric guitar for a few more songs including "Please Come Home Before It Rains" and "Hey Joe."

Taylor is a relaxed and fun performer.  He spent a good deal of the night winging it and it went quite well.  If you get a chance to see Otis Taylor, take it.  You never know what he might do!

Oh, and if anyone wants to donate a Santa Cruz Otis Taylor Signature guitar as pictured above, to Delta-Slider, just shoot me an email and I'll let you know where to ship it.  That'd be great!
BUY Otis Taylor from EMUSIC