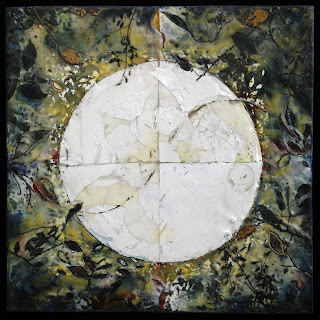 The CD kicks off with a couple tracks where Mucci sets the tone and tempo with his thumb. The first, “Small Triumphs” with just solid time keeping and the second, “The View From Here” with a great driving feel. This tune and the following, “The Culprits” are fantastic works in the modern Takoma tradition. What I like best about cuts two and three is how aggressive Mucci is with the thumb, just hammering out the rhythm.

“The Culprits” has the added surprises that it starts off with some weird noises and suddenly pops into the strong finger picking, once you are grooving on that he slams into slide playing to wrap the song. Really a strong piece.

The calm interludes “Apri L’occhi” parts 1 and 2 appear at the end of each side of the LP, though that distinction is lessened by the fact that I am listening to the CD version. But part 2 at the end of the CD is indeed a nice ending to the CD. The first, “Apri L’occhi” works on the CD as an excellent transition from a solo guitar piece to a full band piece, “Chase Down Alice St.”

Mucci’s use of percussion through out this effort is judicious and never gets in the way of the guitar playing. No, in fact I think it is a nice addition to the feel of the recording as a whole resulting in a lush feel throughout the experience.

One of my favorite aspects of the music is how closely together Mucci has put the tracks. The time between is barely a beat and it binds the music into a whole. That and the fact that the songs flow well from one to the other. Though they are clearly different, the effort feels like one large composition.

This is a limited quantity release on LP with a download included. The digital only price is great. Go visit MMucci.com and check out all the tracks.