I became aware of Ragtime Ralph via the Fahey Guitar Players Yahoo! Group. It was the summer of 2008 when he posted an offer to send 100 people his CD, "Lost Blues 1929-1934" for free.
Ralph just finished recording for his latest project and will begin mixing this week.
Ralph describes himself as “…a bit of a luddite when it comes to technology...no car/TV/computer/toys...my only fun is my guitar and my metal detector for poking around looking for archaeological relics.”
If you are interested in keeping up with Ralph’s latest recording adventures I recommend you sign up for the Yahoo! Group or check in here at the blog periodically. 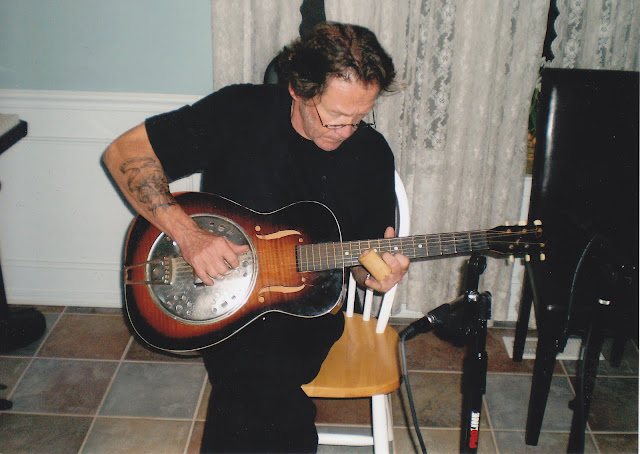 Tell us about the guitars you play.
My guitar...Dixie X...an early 1930s Regal wood bodied resonator...beautiful fat V-neck and wonderfully warm tinny, banjo-like tone on some songs and a real low down bluesy growl on others. She needs a bit of work, but is in pretty fine shape for a budget guitar from the "golden era"!

Did I read somewhere that you used to play surf music? What other musical journeys have you been on besides American Primitive?
Ahhh...surf music! I've had several musical epiphanies in my tenure on this planet...country blues/John Fahey/surf music/Savage Republic/Stereolab...the surf music came at a time when I was quite fed up with Fahey...he'd accused me of using his name to get known in show biz and I needed an out...my best friend played me "Surf Beat '80" by Jon and the Nightriders and it blew my socks off! From there I played lead guitar in the Garage Surfers/the Unknowns/the Surfdusters/the Fridge Magnets...bass in Beaver Patrol...then bass in Quonset which was a bass/scrap metal percussion duo based on Savage Republic...I also auditioned as bass player for Courtney Love’s band Hole...until I heard that Fahey had died...then I changed my name to Blind Brand X.

I think it’s great that you cultivate two different personalities, Ragtime Ralph and Blind Brand X. Does it give you more freedom to play two different styles of music? Where did the names come from?
Ragtime Ralph was my alter ego before Fahey died and Blind Brand X was after his unfortunate demise...for Ragtime Ralph I just came up with the name one day...it sounded more jazzy than just plain ol' Ralph Johnston...the Blind Brand X came from my distaste for today’s consumer society...just a dig at blind brainwashed consumer spending habits...brand x is better than brand z....that kind of mentality...it also differentiated the way I'd play...then and now...then I used fingerpicks and tried to play fast like Leo Kottke...ignoring the subtlety and space between notes...now I play with pauses...and fewer notes rather than more...I find it quite interesting, reinterpreting Ragtime Ralph songs the way Blind Brand X plays them...it gives them a whole new incarnation...but holding on to the spirit of the original versions.

What about how you learned to play this style, did you have a mentor? Did you learn by ear?
I started playing this style of music when in 1969 I saw John Fahey on the PBS show Guitar, Guitar...I was so knocked out by what I'd heard that I immediately tracked down several Fahey albums (Yellow Princess/Transfiguration of Blind Joe Death) and started teaching myself by ear. I had the good fortune to have an older brother who owned a guitar shop...I worked part time there and learned some tunings from some books and magazines he was selling. I took one lesson at another shop from a guy who taught me a Mance Lipscomb song "Texas Rag"...and that song will be on my next CD! The only other lesson I took was from John Fahey himself! He and his wife Melody stayed with me for a night...John was playing at the Vancouver Folk Festival the next day...I was having difficulty with a chord in one of his songs...he straightened me out and the song "Ragtime Piece In G ( aka Television Rag) appeared on Ragtime Ralph Volume 4.

Can you tell us a little about how you were almost a part of the Takoma catalog? What happened there and how did you feel about that then and now?
Fahey had contacted me after I'd sent him copies of the first three Ragtime Ralph EP’s...he seemed to like my stuff and over dinner one night when he'd come up to Vancouver to play at the Soft Rock Cafe where I opened for him he suggested to me that he might be interested in releasing the album (Volume 4) I'd completed. Then out of the blue I started getting weird phone calls from John...he said I was using his name to get "known in show business", and one time a very drunk Fahey phoned me at 3 AM babbling about some sort of nonsense or another...by then I was starting to get an inkling that John might be a little troubled...so I released the album myself and never really thought too much about the Takoma thing...I've always been very wary of people making all kinds of promises...it seems to happen to me fairly often...someone has a big idea...more often than not it turns out to be mostly smoke and mirrors...especially when I hear it coming from some drunk in a club somewhere...that's one big reason I like doing things the way I do...I'm not beholden to anyone. It was nice though that John recorded my arrangement of "Away In A Manger" on his Varrick Xmas album...I'm so proud when I show folks the record with my name right on the label...that's the biggest kick I got out from my tenuous relationship with Fahey. I never felt any resentment towards him 'cause he gave me so much in the form of music. John never liked to take any credit for how his music affected people like me...but I bring his name up whenever possible and try to turn folks on to his wonderful music!

Why do you give away your music?
I have to quote my favorite "rock band" Savage Republic for this one..."I can't seem to see the things you see" from their song "Film Noir"...I am in turmoil with the capitalist system...I have so much while the rest of the world starves...I need very little, so I figure I might as well take a bit of burden off the system and at least offer what I do to the world for the world to enjoy without the world being mired in the red tape that seems to entrap all of us in our daily lives...I need no reward for what I do...I don't seek fame or glory...I just know that my music might inspire others to do the same...and the music they might produce will possibly go on to inspire others!

Can you tell me how you came up with the Empty Square Records name?
Empty Square comes from me misunderstanding Charlie Patton’s lyrics on "Mississippi Bo Weavil Blues"...I always thought he was singing "Eat all your blossoms and leave you an empty square"...but blues scholars have determined the lyrics are "Sucks all the blossoms and he leave your hedges square"...to me it doesn't really matter...as mistakes lead to new and exciting discoveries...a lot of my songs are based on mistakes made when playing songs I already think I know...a slip of the finger and...voila!...a new sound/chord/melody...I often look forward to mistakes to shake me out of the doldrums that encircle me while playing the same song over and over again...like finding the gold nugget in the slag heap! The tattoo I have on my left arm was based on a photo of Charlie Patton...and I added the "Empty Square" in banners surrounding a suit wearing, guitar playing skeleton! What some of us will do for attention!

Are you planning a road trip/tour anytime?
I'm actually planning on traveling the USA on my holidays...renting a car and visiting the gravesites of Fahey/Patton/Hutchison/Hurt/White...and stopping in on Joe Bussard and Glenn Jones...and I hope to maybe pass through some of the towns of folks on my mailing list and maybe...pickin' a tune or two. I'm hoping this will all take place starting in May this year! I will elaborate further later!

What is your latest project?
My latest project is "Wreck of the Ol' 78"...I'm doing 13 of my favorite old blues and country songs and we are going to engineer the whole thing to sound like a batch of dusty old 78s! I really love the sound of old records and I explain my fascination in the CDs notes!

How are you doing your current recordings? Are you using a studio or is it a home set-up?
We're doing the recordings in Oliver Conways Aero Studios...Oliver is the soundman at the Vancouver blues club The Yale, as well as being the guitarist for several local blues/rhythm and blues bands. It's a small room in the basement of a music equipment supply company and he has a nice digital setup and knows how to get around it quite nicely. We use 4 mics: one near the resonator, one at the headstock and 2 room mics about 4 feet away and about 5 feet in the air. We usually do one or two takes of each song as I seem to know the stuff pretty well before entering the studio...I don't care if the takes are perfect, just as long as the flubs aren't obvious!

Any chance you are going to be on the upcoming Imaginational Anthem Vol. 4?
I'd sent Tompkins Square Records several of my releases, but I never heard back from them...I don't crave exposure...I'm having lots of fun doing what I'm doing...in the past I was turned down by Kicking Mule Records, Windham Hill Records and eventually Takoma Records but I knew I could never commit to being signed to a label because I work lots and am extremely, how would you say shy, to play in public...a hurdle I've not yet been able to conquer.

If a label offered to sign you would you do it?
I don't know if I'd want to be signed to a label...they probably couldn't justify spending money on someone who probably wouldn't tour to support an album...my approach of playing, recording and sending out free music satisfies my needs...to play...to document...and to communicate with others...apart from these things I have no goals...I just like to send the music out...like that Police song "Message In a Bottle"...set the music adrift and see where it ends up...even if nothing happens with the music in the outside world, I'm still happy and satisfied with what I do. Not being signed to Takoma never phased me a bit...I just kept and keep on releasing my own stuff...Fahey HATED the business end of Takoma and I don't want Empty Square to become a business. Fahey also disliked playing in public but felt trapped because it was his job, not a hobby like music is for me, although it's a hobby that pretty well dominates my non worklife. Oh well, I'll just dawdle along and enjoy this marvelous gift bestowed upon me...it makes me happy and seems to make other people happy too....I can't ask for much more than that!