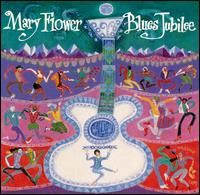 Chances are that you'll find Mary Flower in the folk section of your local record shop. She did found a folk-cum-jazz-based ensemble called Mother Folkers in Denver, which was the mile-high city's leading women's folk collective; and she could look the part of a folkie "Earth mother" type. Flower moved seriously into blues over the last decade, however, and hasn't looked back since.
Born in Delphi, IN, Flower made her way to Denver at the beginning of the '70s, when she was in her twenties, and set up shop in the city's folk community; her gigs made her a name locally, and she established Mother Folkers. She always appreciated the blues, but it was a two-week period of study with Jim Schwall and Steve James at a blues workshop in West Virginia that transformed her.
Flower described herself as "consumed" by the experience, and made the decision to devote herself to the blues. She restarted her career, but initially encountered resistance, partly because she was a white blueswoman who didn't conform to expectations -- ever since Janis Joplin, white female blues performers have been expected to sound like Big Mama Thornton, which Flower didn't, Scrapper Blackwell being more of a role model. Since the early 1990s, however, she has gradually achieved acceptance, and has played places like Buddy Guy's club in Chicago as well as various festivals, where she has been well received, and tours regionally and nationally.
As a folk artist, Flower played alongside Geoff Muldaur, David Bromberg, and Ramblin' Jack Elliot. Her work in blues, however, has been strongly influenced by Scrapper Blackwell, Henry Glover, and Robert Johnson, but especially Blind Lemon Jefferson. She plays with passion, none of it forced or posed, and she has a husky voice to go with the kind of stuff she covers -- she could sing prettier than she does, but what she does seems honest. She also writes originals with a cutting, clever edge. Flower has been around about as long as Bonnie Raitt, only without the major-label record contracts, the arena and movie appearances, or the Grammy, and deserves to be known by at least as many people. ~ Bruce Eder, All Music Guide
Content provided by All Music Guide Copyright © 2008 All Media Guide, LLC